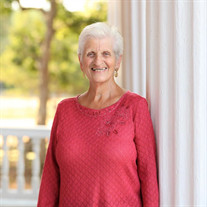 Chrean Sutherland Brown, 79, beloved mother and friend, passed away on Sunday November 15, 2020, after a long battle with ovarian cancer. Mrs. Brown devoted her life to her family. She was an accomplished musician, directed a church choir for 10 years, sang, and played the piano. She was a born nurturer who became a preschool teacher in her 40s, a career she continued into her 60s. She loved children and she loved her home. For many years she and her husband participated in the Tour of Homes in Washington. Mrs. Brown was a devoted friend. She was generous and took care of her neighbors. Even as she battled cancer, she wrote letters of encouragement to other women battling the disease. She had a wonderful sense of humor and believed the world needed more chocolate and that cake for breakfast might just make any day better. She will be missed and yet there is rejoicing that she is reunited with her husband and with our Lord Jesus Christ. Mrs. Brown was attended by her family physician, Dr. Darryl Wiley, for more than 20 years. The talented oncology team at AU, led by Dr. Sharad Ghamande, cared for her for more than a decade. She received the best medical care available and the family is grateful to both doctors for their dedication. She is preceded in death by her husband of 56 years, Archie M. Brown; her brother Richard J. Sutherland; and her sister, Diane S. Ciccone. Survivors include her sister Darlene Wilson Seay, of Chicago, Illinois; three sons, Archie M. Brown Jr. and his wife, Sharen of Cincinnati, Ohio, Robert Nathan Brown and his wife LuRaye of Grovetown, Georgia, and Daniel Victor Brown of Cincinnati; two daughters, Cynthia Marie Brown of Cincinnati, and Penny Brown Gebing and her husband, Kevin of Washington, Georgia; eight grandchildren and two great-grandchildren, including local grandchildren Penelope Cheney Gebing Melton, Brittaney Gebing Roth (Jeffrey), and Zachary A. Gebing of Washington, and great-grandson Darell Jeffrey “DJ” Roth III of Washington. In lieu of flowers, make donations to the Lydia House, 1363 Interstate Parkway, Augusta, Georgia 30909. Hopkins Funeral Home was in charge of arrangements.

Chrean Sutherland Brown, 79, beloved mother and friend, passed away on Sunday November 15, 2020, after a long battle with ovarian cancer. Mrs. Brown devoted her life to her family. She was an accomplished musician, directed a church choir for... View Obituary & Service Information

The family of Mrs. Chrean S. Brown created this Life Tributes page to make it easy to share your memories.

Send flowers to the Brown family.