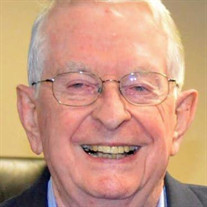 A memorial service for Comer Henry (Buzzy) Randall Jr. will be held at 4 p.m. Thursday, August 15, at the chapel of the Presbyterian Community of Clinton. A homecoming memorial service will follow at 3 p.m. Sunday, August 18, at the First United Methodist Church of Washington Georgia. The family will receive friends in the Fellowship Hall following the service. He died August 10, 2019, at The Hospice House of Clinton, South Carolina, surrounded by his loving wife, Jo, and extended family. Born in Washington, Georgia, February 28,1933, Mr. Randall was the son of the late Comer Henry Randall and Evalyn Dyson Wynne. He and his late brother, David, were owners of Wilkes Mill and Feed Company and served the greater Washington farming community for many years. The mill was a family business started by his grandfather William Wynne, and his father Comer Henry Randall later bought into the business before selling to Buzzy and David.  Buzzy was a member of The Broad Street United Methodist Church of Clinton. Prior to moving to Clinton, he was a member of First United Methodist Church of Washington. He loved his family, his church, Washington-Wilkes, and the Georgia Bulldogs, although the order of his loves sometimes changed.  During his 83 years of residence in Washington, he served as chairman of the Wilkes County Board of Education; was a member of the Washington City Council; the Washington Lions Club where he served as president on several occasions and was proud of his work as chairman of the White Cane Day committee that supported the Lions Club Lighthouse Foundation; the Washington Chamber of Commerce; and the Wilkes County Cattlemen’s Association. Among his many honors were being named a Melvin Jones Fellow of Lions Club International, induction into the Wilkes County Cattlemen’s Hall of Fame, and being named Citizen of the Year by the Washington Chamber of Commerce. He and Jo were named Volunteers of the Year for Washington in 2008. In 2016, he received the Community Service Award from the Washington Rotary Club. For over 30 years he and Jo delivered Meals on Wheels to people in need every Thursday. He was involved for many years with the annual Relay for Life supporting the American Cancer Society and he and Jo created and led the annual Independence Day parade around The Square. He was a member of the Washington-Wilkes Historical Foundation. Mr. Randall was a strong supporter of the Washington Little Theater. In 2016, he and Jo were presented with a commemorative plaque for their many years of service which is on permanent display in the theater lobby. He and Jo, along with others, presented weekly programs at local nursing homes for many years. God’s Marketplace had a special place in his heart as he was a great supporter and their finest steamer of clothes. He served for nine years in the United States National Guard.  Buzzy was a long-time season ticket holder and strong supporter of Washington-Wilkes Tiger Football and University of Georgia football and basketball.  He served many years as a deacon and Sunday School Teacher and sang in the Troupe Harris Jr. Music Department Choir. He also had a distinguished career as Assistant Fire Chief of the volunteer Washington Fire Department working alongside his father-in-law, Joseph R. (Rufus) Rider.  Survivors include his wife of 67 years, Jo Rider (Bug) Randall; a daughter, Lola Evalyn (Lyn) Randall of Tybee Island, Georgia; sons Comer Henry (Randy) Randall III of Clinton and Joseph Rider (Joe) Randall of Athens; daughters-in-law Kimberly Byers (Kim) Randall of Clinton and Jeana Reville Worley of Tignall; a son-in-law, William O. (Bill) Cannon of Tybee Island; grandsons James Rider (Jake) Randall of Charlotte, N.C., and Griffin Richmond Randall of Atlanta; granddaughters Kelley Randall Castaneda of Clinton and Taylor Randall Marlatt of Taylors, S.C.; two grandsons-in-law, Patrick Castaneda of Clinton and Daniel Marlatt of Taylors, S.C.; great grandchildren Ava Wynne Castaneda, Jude Castaneda, Vale Castaneda, and Henry Marlatt.  He was preceded in death by his son Patrick Kelly (Pat) Randall in 1997. Contributions in Buzzy’s memory may be made to the charity of your choice.  Hopkins Funeral Home is in charge of arrangements.

A memorial service for Comer Henry (Buzzy) Randall Jr. will be held at 4 p.m. Thursday, August 15, at the chapel of the Presbyterian Community of Clinton. A homecoming memorial service will follow at 3 p.m. Sunday, August 18, at the First United... View Obituary & Service Information

The family of Mr. Comer H. "Buzzy" Randall Jr. created this Life Tributes page to make it easy to share your memories.

A memorial service for Comer Henry (Buzzy) Randall Jr. will be...

Send flowers to the Randall family.