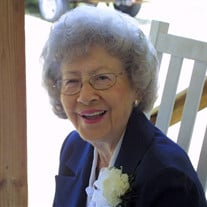 Mrs. Margaret Lee Wilson Peterman, of Lexington, passed away Friday morning at Wills Memorial Hospital. She was the daughter of Claude and Sallie Mae Johnson Wilson, and was the widow of Mr. George Allen Peterman. The Mallorysville community of Tignall, Georgia was home for Mrs. Peterman, a place she lovingly called “down home.” She was raised there as the youngest daughter of nine children, where love was abounded from her large family as well as the large extended family also in the community. Being the youngest daughter, she was closer in age to her nieces and nephews, and in turn, remained in close contact with them throughout their lives. Being a part of a family was important to Mrs. Peterman, and this translated into the loving mother she became. Being a mother was one of her greatest joys in life, only to be surpassed when she became a grandmother and then a great-grandmother. She was apt to dote on and spoil her son and any of her grandchildren as they were an immense source of her happiness. From cutting the crust off her son’s sandwiches to thrusting a can of Coke and a Honey Bun in your hand the second you walked through the door, Mrs. Peterman never let anyone want or need. She was always willing to go the extra mile to make sure her family was happy and cared for. Mrs. Peterman is survived by one son, Steve Peterman (Sharon), of Stephens; one brother, Gene Wilson (Bobbie), of Tignall; four granddaughters, Sabrina P. Ward (James), Stacie P. Beckham (Josh), Shannon Leeann Peterman, and Stephanie P. Bridges (Mason); and three grandchildren, Reeve Ward, Emerson Ward, and Maggie Beckham. She was preceded in death by 5 brothers, R.C. Wilson, John Henry Wilson, Clarence Wilson, Julian Wilson and Grady Wilson, and also 2 sisters, Eula Mae Jones and Sara Edna Caldwell. Funeral services will be 3:00pm Sunday afternoon, July 7, 2019, at the Salem Baptist Church in Lexington with Rev. Brett Mask and Rev. Clayton Sanders officiating. The family will receive friends Saturday, July 6, 2019, from 6-8pm at Hopkins Funeral Home. Memorial contributions may be made to the Salem Baptist Church, 694 Salem Church Rd., Lexington, GA 30648, or to the Mallorysville Baptist Church, 199 Bunch Rd., Tignall GA 30668.

Mrs. Margaret Lee Wilson Peterman, of Lexington, passed away Friday morning at Wills Memorial Hospital. She was the daughter of Claude and Sallie Mae Johnson Wilson, and was the widow of Mr. George Allen Peterman. The Mallorysville community... View Obituary & Service Information

The family of Mrs. Margaret Lee Wilson Peterman created this Life Tributes page to make it easy to share your memories.

Send flowers to the Peterman family.