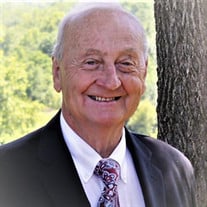 Martin Alfred Cook, a native and resident of the Caney Fork Community in Cullowhee, and one of professional Southern Gospel Music's all-time legends, gained his angel's wings and was promoted to Heaven on February 23, 2002, from the home of... View Obituary & Service Information

The family of Mr. Martin Alfred Cook (Courtesy) created this Life Tributes page to make it easy to share your memories.

Martin Alfred Cook, a native and resident of the Caney Fork Community...