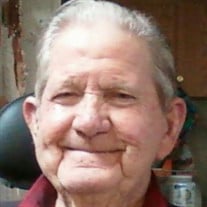 Mr. Paul Pullum, 88, of Oak Grove Rd. in the Metasville Community, entered into rest on Saturday, January 16, 2021, at his home. Mr. Pullum was born January 6, 1933, in Defuniak Springs, FL, to Allen Thomas Pullum and Stella Dell Turbeville Pullum. He joined the U.S. Army at the age of 16 and served as a Medic from 1950-1953. He fought in the Korean Conflict and received a Purple Heart. While serving in the Army, he met his wife, Katherine Anderson. He met her in San Miguel, CA, and was 19 at the time. They were married for 68 years. After being discharged in Callifornia, they moved to Florida, then to Georgia, where they lived for 38 years-twenty of those years in Washington, GA. Paul was preceded in death by his father, Allen Pullum; his mother, Stella Dell Pullum; son, James Paul Pullum; brothers,Elzie, Elbert, Thomas, Jimmy, and their wives: nephew, Little Tommy, and granddaughter, Stephanie Jean Marie Pullum. He is survived by his wife, Katherine Anderson Pullum; two sons, Ken Pullum (Willene), of Harlem, and Richard Pullum, of Metasville; one daughter, Mary Ann Sullivan (Jim), of Cornelia; several grandsons, granddaughters, great grandchildren, great great grandchildren, and many nieces and nephews. Funeral services will be 11:00am Saturday, January 23, 2021, at the Rehoboth Baptist Church with Rev. Steven Rayner and Rev. Larry Martin officiating. Interment will follow at the church cemetery. The family will receive friends Saturday morning for one hour prior to the service at Rehoboth Baptist Church (from 10:00-11:00am). Hopkins Funeral Home is in charge of arrangements.

The family of Mr. Paul Pullum created this Life Tributes page to make it easy to share your memories.

Send flowers to the Pullum family.