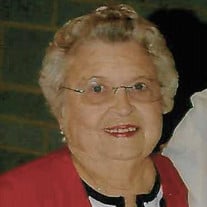 Elizabeth Ann Taylor Cook, 84, of Berkshire Dr. in Washington, passed away Friday evening, October 26, 2018, at Wills Memorial Hospital. Mrs. Cook was born in White Plains on February 15, 1934, to the late Joel Holcomb Taylor and Ruth Story Taylor. She was the wife of Lewis Cook, and had lived in Washington for 50 years. She was the payroll clerk at Royal Manufacturing Company for a number of years, and was a member of the Washington First United Methodist Church. She was also a member of the Cornelia Johnson Circle and of the Willing Workers Sunday School Class at her church. She is survived by her husband of 57 years, Lewis Cook, of the home; two daughters, Susan C. Whittingslow (John), of Atlantic Beach, FL, and Sandra Standard, of Washington; three grandchildren, Cathryn C. Eagle, Taylor Curington, and Doug Standard; two great grandchildren, Ayden Eagle and Reagan Eagle; and one brother, Wayne Taylor (Betty), of White Plains. She was preceded in death by a son, Michael Lee Cook, and by a grandson, Kyle Lewis Standard. Funeral services will be 3:00pm Monday, October 29, 2018, at the Washington First United Methodist Church with Rev. Thomas G. Hall and Pastor Marty Pinion officiating. The family will receive friends from 2:00pm until the time of the service on Monday at the church. Pallbearers will be Ronnie Johnson, Kenneth Johnson, Adam Taylor, John Whittingslow, Daniel Whittingslow, and Shawn Upson. Honorary Pallbearers will be members of the Willing Workers Sunday School Class. Memorial contributions may be made to the First United Methodist Church, to the White Plains Baptist Church Cemetery Fund, or to the Kyle Standard Memorial Scholarship Fund, c/o the Wilkes County Board of Education.

The family of Mrs. Ann T. Cook created this Life Tributes page to make it easy to share your memories.

Send flowers to the Cook family.