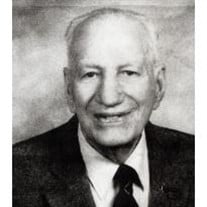 Mr. George Eben Garrard, 96, of Washington, died Friday, August 13, 2010 at Washington Manor. Mr. Garrard was the son of the late George Richard Garrard and Comfort Smith Garrard. He was a native of Washington and a member of Smyrna United Methodist Church where he served as Sunday School Superintendent for 35 years. After graduating from the University of Georgia where he was a member of Alpha Zeta, Aghon, and ran on the track team, he worked as an assistant county agent in Carrollton, GA with the 4-H Club. He worked with other agricultural organizations in Clarke, Lincoln and Wilkes Counties, operated a dairy and later, worked for Pet Milk Company before retiring. Mr. Garrard was married to the late Hazel Ann Matteson for forty years. After the Death of Ann, he was married to the late Agnes Gay Jahera of Augusta. He was married to the late Lillie H. Roberson after Agnes’ death. Mr. Garrard lived in Washington Manor where he enjoyed the friendship of the other residents, the care of the workers and the activities there. The highlight of his week was attending church at Smyrna. Mr. Garrard was preceded in death by his sisters, Katherine Garrard Edwards and Mary Garrard Webb and his brothers, James A. Garrard, F. Deleon Garrard, Reuben R. Garrard and Charles R. Garrard. Survivors are his children, G. Ann Garrard Mansur, Benjamin R. Garrard of Washington and step-son, Dr. John Jahera, Jr., of Auburn, Alabama and his brother William R. Garrard of Hickory, North Carolina. He is also survived by his grandchildren, Alexander Garrard of Jacksonville, FL and Stephanie Garrard and her husband, Matthew Israelson of Washington, DC Funeral services will be Sunday, August 15, 2010 at 2:00pm in Smyrna UMC with interment following in the church cemetery. David Garrard, Marshall Garrett, Charles Rhodes, Robert Spears, Emory Strother, Dennis Dehil, Pierce Barden and Jim Griggs will serve as pallbearers. The family will receive friends at the church Sunday, beginning at 1:00pm until service time Memorial contributions may be made to the Smyrna Cemetery Fund c/o Marshall Garrett, 3262 Lincolnton Rd., Washington, Ga. 30673

Mr. George Eben Garrard, 96, of Washington, died Friday, August 13, 2010 at Washington Manor. Mr. Garrard was the son of the late George Richard Garrard and Comfort Smith Garrard. He was a native of Washington and a member of Smyrna United... View Obituary & Service Information

The family of George Garrard created this Life Tributes page to make it easy to share your memories.

Send flowers to the Garrard family.