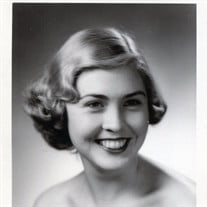 Helen Young Pierce, 84, of Washington passed away on September 6, 2014. A memorial service will be held on Friday, September 12 at 4pm, at the Episcopal Church of the Mediator on East Robert Tombs Avenue, Washington, with the Reverend Loree Reed officiating. Mrs. Pierce was a native of Henderson, NC and had lived in Washington for 58 years. She was preceded in death by her husband, Jean William Pierce, her parents Helen Matilda Goodwyn Young and Robert Gill Young Sr, and her brother Watkins Goodwyn “Bo” Young. She is survived by her brother, Robert Gill Young Jr and his wife Shirley of Henderson NC, three sons and their wives, Jean William Pierce Jr and Elizabeth Wilburn Pierce of Memphis, TN, Robert Cooper Pierce and Pamela Brown Pierce of Atlanta, Ga., Marshall Pope Pierce and Lynn Fortescue Pierce of Middleburg, VA; a daughter and her husband, Helen Louise Pierce Bradner and James Wood Bradner IV of Richmond, VA; and seven grandchildren including Palmer, Mary, Alton, Pope, and Mary Marshall Pierce; and Pierce and Caroline Bradner. Mrs. Pierce attended St. Mary’s College in Raleigh, NC, made her debut in Raleigh, NC, and graduated from University of North Carolina at Chapel Hill, where she was a member of the Delta Delta Delta sorority. She traveled to Germany where she taught at Patrick Henry High School in Heidelberg, Germany, while Jean served as an OSI Agent in the Air Force and then moved to Wilkes County to raise their family. A celebration of life reception in honor of Helen, will be held at the Pierce’s home, 311 Sims Street, Washington, directly following the service. In lieu of flowers, donations may be made to The Episcopal Church of the Mediator, Washington, GA

Helen Young Pierce, 84, of Washington passed away on September 6, 2014. A memorial service will be held on Friday, September 12 at 4pm, at the Episcopal Church of the Mediator on East Robert Tombs Avenue, Washington, with the Reverend Loree... View Obituary & Service Information

The family of Mrs. Helen Pierce created this Life Tributes page to make it easy to share your memories.

Helen Young Pierce, 84, of Washington passed away on September...

Send flowers to the Pierce family.