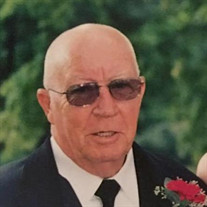 Mr. Joseph Edward Griffin, 80, of Washington, died Thursday, December 21, 2017 at Kindred Hospice in Athens. Mr. Griffin was born in Colquitt, GA, and was the son of Percy and Minnie Lee Richardson Griffin. He was the husband of Jewell Nunn... View Obituary & Service Information

The family of Mr. Joseph Edward Griffin created this Life Tributes page to make it easy to share your memories.

Send flowers to the Griffin family.