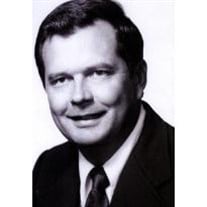 Joe W. Bennett, Jr. was born in Washington, GA on December 16, 1938 and died on April 18, 2009. He was the son of the late Joe W. Bennett, Sr. and Emelyn Armstrong Bennett Fenanga. His grand-parents were the late Mr. and Mrs. George T. Armstrong and the late Mr. and Mrs. Nathan R. Bennett, all of Washington. Joe graduated Washington High School in 1956 and attended Georgia Tech. He received a Bachelor degree in Forestry from the University of GA in 1961 and a Masters in Forestry from Yale University in 1962. After a twenty-four year career, he retired in May of 1996. He was a member and past director of the Georgia Forestry Association and the South Carolina Forestry Association. Joe is survived by his wife of twenty-eight years, Deborah Pye Bennett, four children, and nine grandchildren- Joe (Laurie) Bennett III, Will and Ben of Sugar Hill, GA; Jon (Sabrina) Bennett and Alli; Jim (Donna) Bennett, Jessica, Zach, and Jake; and Amy Bennett (Will) Long, Nicholas, Bobby and Destiny all of Washington-Wilkes, GA. He was preceded in death by his sister, Terrie Bennett Saggus, and his nephew, Don R. Saggus, both of Washington-Wilkes, GA. He is also survived by his brother, George A. (Nancy) Bennett, Sr. of Marietta; nephew, George A. (Tiffany) Bennett, Jr. and great nephew and niece, George III and Lauren of Snellville; great-nephews Joshua and Caleb Saggus of Washington; and life-long friend Janie Bates of Washington. The family will receive visitors at home on Sunday, April 19th from 3-5 pm. Burial will be private in the Armstrong Family Cemetery officiated by Rev. Albert Huyck of Tignall, GA. Beginning at 2:00 pm on Monday, family and friends are invited to grounds of the Armstrong House at 2990 Tignall Road (Hwy 17 N at m/m16), Joe’s boyhood home and presently the home of Mr. and Mrs. Sam Moore and Joshua and Caleb Saggus. A memorial service and celebration of Joe’s life will begin at 3 pm officiated by Rev. Robert N. Murphy of Bishop, GA. In lieu of flowers, memorial contributions may be made to Wills Memorial Hospital Foundation, P.O. Box 176, Washington, Ga. 30673

Joe W. Bennett, Jr. was born in Washington, GA on December 16, 1938 and died on April 18, 2009. He was the son of the late Joe W. Bennett, Sr. and Emelyn Armstrong Bennett Fenanga. His grand-parents were the late Mr. and Mrs. George T. Armstrong... View Obituary & Service Information

The family of Joseph Waldo Bennett Jr created this Life Tributes page to make it easy to share your memories.