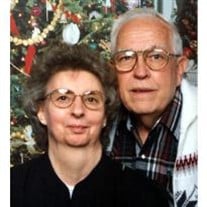 Mrs. Kathryn Taylor Clemmons, 71, of Crawfordville, died May 29, 2009 in Wills Memorial Hospital. She was a native of Taliaferro County, the daughter of the late Emmett A. and Samantha Combs Taylor. Mrs. Clemmons was a member of Crawfordville... View Obituary & Service Information

The family of Lillie Kathryn Clemmons created this Life Tributes page to make it easy to share your memories.

Send flowers to the Clemmons family.