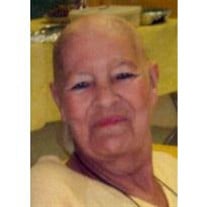 Linda Stevens Mrs. Linda Owens Stevens, 65, of Washington, died Tuesday, May 26, 2009 at home. She was a native of Taliaferro County, the daughter of the late William A. Owens and Carrie B. Vandiver Owens. Mrs. Stevens was a retired cloth... View Obituary & Service Information

The family of Linda Stevens created this Life Tributes page to make it easy to share your memories.

Send flowers to the Stevens family.