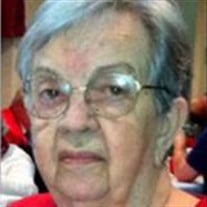 Mrs. Martha Jarrell Hopkins, 92, formerly of Washington, died Wednesday evening, May 24, 2017, at Royal Oaks Senior Living in Summerville, SC. Mrs. Hopkins was born in Macon on December 13, 1924. She was the daughter of the late Randolph T. and Ollie Cox Jarrell. She “grew up” in Atlanta, and attended Oglethorpe University and Georgia State University. She married Benjamin Egbert Hopkins on March 7, 1944, in Columbus, OH. She lived most of her life in Washington, raising one daughter and five sons. She was the owner/manager of The Smoke House Restaurant, and later, The Fabric Shop. She enjoyed plays, was an active member of “The Little Theater”, and taught tap dancing to a number of Washington’s young people. She was a past member of the Washington First United Methodist Church. Following the death of her husband (Egbert) in 1993, she moved to Summerville, SC (1995). Martha lived in her own home near her daughter, Judy, and later became a resident at the Royal Oaks Senior Care Facility for a number of years. She was preceded in death by her parents, her brother, Randolph Jarrell, Jr., a sister, Fleeta Anne Green, and by a son, Mark A. Hopkins. Mrs. Hopkins is survived by one daughter, Judy Hopkins Jacobs, of Summerville, SC; four sons, Ben Hopkins (Wenjiong), of Langhorne, PA, Scott Hopkin (Sandy), of Houston, Bob Hopkins, of Woodstock, and J.B. Hopkins (Jackie), of Austin, TX; and by a number of grandchildren. A memorial service will be celebrated at 11:00AM Saturday, June 17, 2017, at the Washington First Baptist Church with Rev. Albert Huyck and Rev. Kevin Madden officiating.

Mrs. Martha Jarrell Hopkins, 92, formerly of Washington, died Wednesday evening, May 24, 2017, at Royal Oaks Senior Living in Summerville, SC. Mrs. Hopkins was born in Macon on December 13, 1924. She was the daughter of the late Randolph T.... View Obituary & Service Information

The family of Mrs. Martha Jarrell Hopkins created this Life Tributes page to make it easy to share your memories.