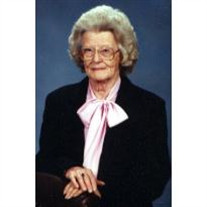 Nettie Hunt Mrs. Nettie Jenkins Hunt, 95, of Sparta, died December 7, 2008 in Chaplinwood Health and Rehabilitation Center. She was a native of Carnesville, Georgia, the daughter of the late John and Essie Williams Jenkins and the widow of... View Obituary & Service Information

The family of Nettie Hunt created this Life Tributes page to make it easy to share your memories.

Send flowers to the Hunt family.