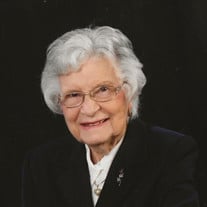 Mrs. Norma Frances Johnson Hopkins, 95, passed away peacefully on Sunday afternoon, January 17, at Southern Manor in Washington. Mrs. Hopkins was a native of Elbert County, Georgia, born June 27,1925, and was the last surviving daughter of seven children of the late Frances Blackmon and Obie Butler Johnson. Mrs. Hopkins grew up in Danburg, Georgia, where she graduated from high school before attending Berry College in Rome, Georgia, in the early 1940’s. Mrs. Hopkins left college in 1944 and worked in Oak Ridge, Tennessee, for a short period and was considered one of the women referenced in Denise Kiernan’s book, “Girls of the Atomic City” published in 2013. In 1946 she married Dennis W. Hopkins of Washington, Georgia. They operated Washington Dry Cleaners from the late 1940’s until they retired in 1982. She was a long-time and active member of First Baptist Church of Washington where she taught children’s Sunday School for over 35 years. Mrs. Hopkins loved to sing and was a member of Berry Quartet during her time there as well as being a member of First Baptist Church Senior Choir for many more years until she was no longer able to attend. Mrs. Hopkins loved her flowers and was a charter member of the local Iris Garden Club. Mrs. Hopkins was preceded in death by her husband of 53 years, the late Dennis W. Hopkins, Sr. who died in 1999. Survivors include her four children, Dennis W. Hopkins Jr. (Frances) of Acworth, Clifford A. Hopkins (Lynda) of Hilton Head, S.C.; Joy Hopkins Goodrick (Kirk) of Canton, and Kay Hopkins Sauls (Bob) of Marietta her grandchildren, Jennifer Doan(Louis) of Winston-Salem, N. C., Emily Hopkins (Scott Marshall) of Mechanicsville, Virginia, Lindsey Hopkins of Fort Worth, Texas, Don Goodrick of Marietta, Andy Goodrick (Giang) of Canton, Blake Hopkins of Boston, Massachusetts, Jason Hopkins (Kristen) of Columbia, S.C., and John Sauls of Marietta. Mrs. Hopkins is also survived by seven great-grandchildren in addition to many nieces and nephews. Due to the current Covid-19 circumstances, a private service with only the immediate family will be held. The family is sincerely grateful to the staff at Southern Manor and her private sitters for their kind treatment of Mrs. Hopkins during her stay. In lieu of flowers, the family requests memorials be made to First Baptist Church, P. O. Box 603, Washington, GA 30673, or Southern Manor, 184 Pine Lane, Washington, Georgia, 30673. Hopkins Funeral Home of Washington is in charge of the arrangements.

The family of Mrs. Norma Frances Johnson Hopkins created this Life Tributes page to make it easy to share your memories.