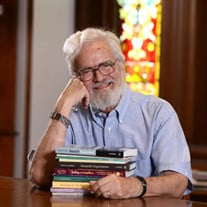 Celebrated university educator Thomas Powell Holland, 78, of Washington GA, died quietly at his home on May 11, 2021. The son of the late Thomas Wesley and Dorothy Powell Holland, he was born August 18, 1942, in Bartow FL. Recognized nationally and internationally for his outstanding scholarship and expertise in the study of nonprofit organizational management and leadership, he earned a doctoral degree at the Heller School for Social Policy and Management at Brandeis University where his research focused on the impact of changes in management of nonprofit service organizations. Holland also earned a master’s degree in social work at Florida State University and a bachelor’s degree magna cum laude at Wheaton College. He joined the University of Georgia faculty in 1986 after serving as associate dean and chair of the doctoral program at Case Western Reserve University’s Mandel School of Applied Social Sciences. From 1989-1999 he also served as a Clinical Professor at the Medical College of Georgia and in 2008, he received the Fulbright-Masaryk Award to teach in the Civil Society Program, Charles University, Prague, Czech Republic. The founding director of the UGA School of Social Work’s doctoral program and co-founder and driving force behind the development of the Institute for Nonprofit Organizations, Holland retired from the University of Georgia with Professor Emeritus honors in 2012. In 2018, Holland and his family established the Thomas P. Holland Distinguished Professorship in Nonprofit Management and Leadership at the University of Georgia. Throughout his 46-year career in higher education, he worked to strengthen universities and nonprofit organizations throughout North America and around the world, including Europe, South America, Africa, Australia and the Middle East. A prolific scholar, Holland was author or co-author of 16 books on the subjects of nonprofit management and board development and published more than 140 refereed journal articles, book chapters, and monographs in his field of study. Always engaged with community efforts to improve lives and educational opportunities, he chaired the boards of The Episcopal Day School, CASA/Children First, and Community Connection. He served on the vestry of Emmanuel Church in Athens GA, where he also taught several classes. After relocating to Washington GA, he served briefly on the board of the Wilkes County Community Partnership. When he received the diagnosis of Alzheimer’s disease in 2017, he determined to live life to the fullest for as long as he could, including a trip with Myra out to Colorado last December to spend Christmas with three of their four grandchildren. Their cabin in Mountain Rest SC was always a place of peace and restoration, even up until a few days before his death. He and Myra also shared their experiences and insights about living with Alzheimer’s through OLLI in both Athens and Washington. A sophisticated world traveler, avid gardener, and kind friend, he is survived by his wife of 27 years, Myra Blackmon of Washington GA, his daughter Kimberly Jean Bolton of Jacksonville FL, his son Richard Blackmon Johnson (Sarah) of Penrose CO, his sister Sheryl Holland (Kenneth Langston) of Tucson AZ, his brother Timothy Holland (Marti) of Orlando FL, and grandchildren Trevor Bolton, Zachary Bolton, Amelia Johnson, and Scarlett Johnson. Contributions in his memory may be made to the Holland-Blackmon Fund for Children at the Athens Community Foundation or to the Institute for Nonprofit Organizations at the UGA School of Social Work. Because of space limitations and COVID precautions, the memorial service will be family only at the Episcopal Church of the Mediator on May 22. It will be followed at 4 p.m. by a celebration of Tom’s life at their home, 201 Greens Grove, Washington, GA. Friends and family are welcome.

Celebrated university educator Thomas Powell Holland, 78, of Washington GA, died quietly at his home on May 11, 2021. The son of the late Thomas Wesley and Dorothy Powell Holland, he was born August 18, 1942, in Bartow FL. Recognized nationally... View Obituary & Service Information

The family of Dr. Thomas Powell Holland created this Life Tributes page to make it easy to share your memories.

Send flowers to the Holland family.