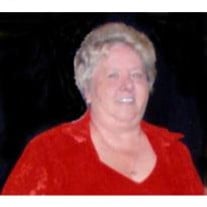 Mrs. Penny Ann ‘Tillie’ Stone, often called "Nanny", 60, of Rayle, died Wednesday at Doctor’s Hospital in Augusta. Mrs. Stone was a native of Halls, Tennessee, the daughter of the late William and Norma Greene Meek. She was a homemaker. Besides... View Obituary & Service Information

The family of Tillie Stone created this Life Tributes page to make it easy to share your memories.

Send flowers to the Stone family.