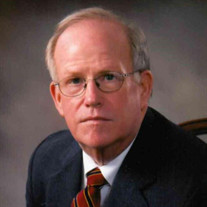 Our hearts are broken at the loss of our beloved husband, father, and grandfather, Walter Louis “Lou” Harris, who died January 10, 2021, after a short illness. Lou, a native of Tunica, Mississippi, was born on September 7, 1949 to Louis Lynn Harris and Frances Hodges Harris, his mother being formally of Hartwell. He was named after his grandfather, Walter L. Hodges, Superior Court Judge of Hart County and bore a striking resemblance to him. Lou attended high school at Darlington School in Rome, Ga., and graduated in 1967. He went on to receive a BS degree in Marketing & Management from the University of West Georgia. After graduation, he served his country in the Army National Guard. He later became a Certified Life Underwriter and went on to establish a successful independent financial services firm-W.L. Harris Advisory in Roswell, Ga. He had no plans to retire as he loved serving the needs of his many clients and cared for them as “family”. Lou was the kindest person anyone could ever meet. Those that knew him can vouch for the fact that when he was with you, he made you feel special-because to him, you were! He wanted to know all about you. His enthusiasm and positive attitude affected everything he did. As a part time resident of Washington, Ga., Lou was a charter member of the Washington Wilkes Chapter of the Sons of the American Revolution and served in many capacities, including President. Members know well that Lou was always available to help this organization as they promoted the history and values of our forefathers. He served as a Deacon of Johnson Ferry Baptist Church in Marietta, Ga., and later at the First Baptist Church in Washington, Ga. At Johnson Ferry, he established the Silver and Gold Ministry, conducting worship services in area Assisted Living and Nursing Homes. Lou was known to the residents as the ‘preacher” while his wife Carol was the “song leader”. This ministry, with the help of many others, went on to establish the Magnolia Ball, a yearly affair for senior citizens, to enjoy dancing or listening to live music from their youth. In 2007, Lou began the task of forming a new community of Tres Dias in Northeast Georgia. Tres Dias is a worldwide ministry for Christian Renewal with a focus of equipping people to be “servant leaders” in their local churches. At the time of his death, he and his wife were working to establish a new Tres Dias community in Upstate South Carolina. He developed a passion for evangelism after serving with Billy Graham’s last Atlanta Crusade and was instrumental in starting Young Life Ministries in Rome, Ga. He treasured his family and loved every moment he spent with them. Memorial Day at Seabrook Island, S.C. was a favorite tradition. His family is committed to carrying on his legacy of Christian love, encouragement and service. Lou is survived by his wife of 53 years, Carol Lindsey Harris, and children, Lindsey Davis of Athens, Ga., Louis Harris, Jr. (“Jackie”) of Mableton, Ga., and Katherine McEvoy (Michael), of Charleston, S.C., and grandchildren, Laura Davis, of Norfolk, Va.,Stuart Davis, of Athens, Ga., Brooks McEvoy, Elijah McEvoy, and Naomi McEvoy, all of Charleston, S.C. Graveside services will be held Sunday, January 17, 2021, at 3:00 p.m. at Resthaven Cemetery in Washington. Masks and social distancing are encouraged. A Celebration of Lou’s life will be held at a later date. Memorials may be made to the Preschool Children’s Ministry of First Baptists Church, P.O. Box 603, Washington, GA 30673 Hopkins Funeral Home is in charge of arrangements.

Our hearts are broken at the loss of our beloved husband, father, and grandfather, Walter Louis &#8220;Lou&#8221; Harris, who died January 10, 2021, after a short illness. Lou, a native of Tunica, Mississippi, was born on September 7, 1949... View Obituary & Service Information

The family of Mr. Walter Louis "Lou" Harris created this Life Tributes page to make it easy to share your memories.

Our hearts are broken at the loss of our beloved husband, father,...

Send flowers to the Harris family.